Spinach Harvest #5 by Mid-April with Wallowaters

We plant greens year around, using Wallowaters to keep them growing through the freezing months.  After the last harvest in the fall, we trim the plants down to small enough nubs to place Wallowaters over them, usually covering several at once.

Most seasons, we will see the roots regrow full leaves in February or March, as the sun begins to make the inside of the Wallowaters to get hot from the radiating heat coming from the water. This Winter, they never really stopped growing, and by late January, we had our first harvest as the leaves completely filled the Wallowaters.

By April, we were up to 5 full harvests, which were increasing with frequency as the Spring progressed. There were a few light frosts, but no real hard freezes from February through April.  This harvest yielded 4 very large bags of Spinach, nearly filling half our refrigerator.

This isn’t the only thing doing well early on. The Onions we planted the last weekend in March are now approaching a foot tall, and the ones planted the following weekend are nearly fully sprouted.  Garlic is also looking great, at nearly 18 inches tall.

Sunshine, our little black cat inspects the garden, and guards us while we work in the evening before sunset.  It’s her favorite time in the garden.  JoJo stops by too, and while she guards, she’s looking to play. Always looking to play. 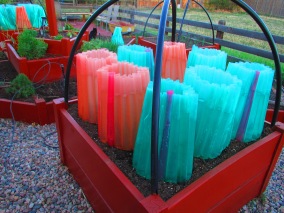